PLASMONICS is revolucionazing light-based technology via electron oscilation with metals. 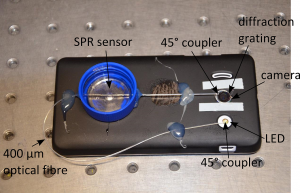 The SPR or Fiber optic Surface plasmon resonance is an optical phenomena —that occurs when when light causes electrons on the surface of a thin film to jostle— capable to detect the composition of a liquid or the presence of particular biomolecules or trace gases.

Surface plasmon resonance occurs when a fixed beam of light strikes a metallic film; most of the light is reflected, but a small band is absorbed by the film’s surface electrons, causing them to resonate. When the metallic film is placed in contact with a fluid, the index of refraction of the liquid changes the absorbed band’s size and location in the light spectrum. By adding recognition elements to the film that cause a shift in the index of refraction when bound to targeted biomolecules or trace gases, scientists can thus determine important information about a biological sample’s composition based on which light is reflected and which is absorbed.

Kort Bremer with Bernhard Roth, director, Hanover Centre for Optical Technologies (HOT), University of Hanover, Germany assure that this can be miniaturized into Lab-on-Chip and incorporated to the smartphones for body fluid analysis.